Osteochondrosis is a disease of the spine, associated with dystrophic processes in the articular cartilage and adjacent to them bone tissue.

Osteochondrosis can develop with the following adverse factors:

Prolonged increased stresses on the spine (large body weight, sedentary work in an uncomfortable position, lifting and wearing weights);
Curvature of the spine from its main axis in the lateral or anteroposterior direction (kyphosis, scoliosis);
Malnutrition in the intervertebral disc;
Genetic predisposition to changes in cartilaginous tissue;
Trauma of the spine.

The onset of osteochondrosis is usually not clinically expressed. At the first stage, there are changes in metabolic processes in the intervertebral discs. The patient may experience general discomfort associated with fatigue of the muscles of the back and neck.

In the second stage of osteochondrosis, changes in the intervertebral discs increase, which leads to disturbances in movements in the spinal column. At this stage, the patient may experience severe pain in the affected spine. The pain will be characterized as blunt, aching along the vertebral column, or to shoot into other parts of the body with pinching of the spinal roots (the so-called radiculitis). 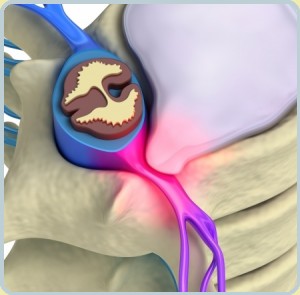 Herniated spine, or intervertebral hernia, alas, a very frequent disease. The causes of hernias can be both internal and external factors. Dangerous can be and hereditary changes that occur in the spine.

External causes that lead to the appearance of intervertebral hernia are traumatic injuries that result from increased stresses, as well as chronic factors such as incorrect posture.

The tissues that make up the intervertebral disc lose their elasticity and form a protrusion - a hernia, which begins to press on the spinal cord, blood vessels and nerve endings. There is pain and disrupted the work of those internal organs, the innervation of which is broken by a hernia. The location of the site and the size of the hernia affect the clinical picture and the severity of the symptoms.

Hernia of the spine in 90% of cases is susceptible to conservative treatment. Medicinal treatment plus physiotherapy and physiotherapy are used. It is important not only to eliminate the pain that has arisen, but also the causes that caused it.

Treatment of osteochondrosis and intervertebral hernia according to the  Evminov Method is directed, first of all, to the elimination of pain and muscle spasm. The next stage is dosed unloading and training of short back muscles.

Classes on Evminov's Technique on the Inclined board “Prophilactor Evminova” allow setting up nutrition in intervertebral discs.

The program of therapeutic exercises is selected individually and gradually adjusted (as the condition improves and muscle training improves).

For the treatment of osteochondrosis in the cervical region, an additional device is used - the Glisson loop, in which special exercises are performed.