Disorders of posture and scoliosis 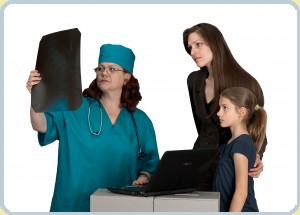 Disorders of posture in children are a dangerous disease. It can progress all life, causing more and more new diseases.

There are violations of posture:

In the frontal plane - scoliotic posture.
In the sagittal plane:
Round back is a common kyphosis from the 5 lumbar vertebrae with smoothing of the lumbar and cervical lordosis.
Round-concave back - deepening of the thorax kyphosis with an increase in cervical and lumbar lordosis.
Lordotic posture - an increase in lumbar flexure.
Flat back - smoothing of all physiological curves.

The violation of posture is said when the pathological curvature of the spine is noted in the child in the standing position and completely disappears when going to the horizontal position.

At the slightest suspicion of violations of posture, it is necessary to conduct a professional examination of the child with a doctor.

Stages (degrees) of scoliosis according to clinical and functional indices:

I degree - (angle of curvature up to 10 degrees) is visible at flexion, extension and lateral inclinations, is determined with functional tests.

II degree - (angle of curvature 11-30 degrees) is determined when viewed in standing position. The curvature of the spine at this stage disappears in the supine position.

III-IV degree - (angle of curvature 30-50 degrees) is characterized by a strong curvature of the spine, which does not disappear in the supine position. An incorrect load on the muscles, ligaments and joints of the spine in severe scoliosis leads to gross morphological changes in the tissues: partial ligation of the ligaments, changes in muscle fibers, and deforming spondyloarthrosis. Limited mobility of the spine in the direction of convexity.

In Evminov's Center you can pass the diagnosis of the child's posture using a photo-computer method without using an X-ray.

After the exact diagnosis, he chooses a set of exercises (Evminov's Methodology Programs), which restore the spine, help to correct his pathology.