Advantages of the methodology 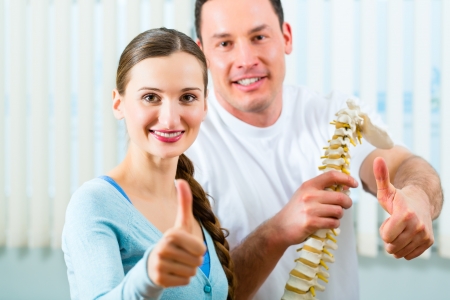 Evminov's method is the patented and approved by the Ministry of Health of Ukraine method of curative physical training (kinesitherapy) for the treatment, recovery and prevention of spine diseases at any age.

Evminov's technique is the only technique by which the mechanism of restoring the structures of the spine is triggered:

Combination of dosed stretching (unloading) of the spine and

Back pain is one of the most common medical problems with which about 80% of the population of Western countries are familiar. The causes of this ailment are manifold, and often not at all amenable to diagnosis. Over time, the problem can be exacerbated: once emerged, in 75% of cases, attacks of acute pain are repeated within the next year. Over time, a vicious circle is created: because of pain, a person reduces activity, begins to lead an increasingly less mobile way of life, and this only aggravates his condition, the lower back begins to ache from the most insignificant loads.

A group of Australian researchers decided to generalize the world experience in the treatment of back pain, comparing the effectiveness of many medically tested therapeutic techniques. The authors found and studied about 6 000 clinical trials, which tested the effectiveness of different methods of preventing relapses. In this huge array, 23 works were found with complete adherence to strict standards of scientific methodology - with control groups, taking into account possible extraneous factors and statistically reliable results. In total, these studies covered about 30,000 patients who received different types of treatment.

The conclusion of the survey, published in the journal JAMA Internal Medicine, is unambiguous and categorical: a noticeable and tangible effect of preventing relapses in back pain is given only by physical exercises - nothing else helps! No reliable effect from the use of various bandages, supporting belts, orthopedic inlays in shoes, recommendations for lifestyle changes and so on. It was not found. But exercise programs, in which patients participated under the supervision of physicians, gave, on average, an almost two-fold reduction in the risk of recurrence of the attack in the coming year.

The authors note that the expressed positive effect depended also on the systematic nature of the exercises. Helping gymnastics aimed at strengthening the muscles of the body, and aerobic and strength exercise - always provided that the patients performed them systematically, 2-3 times a week.

The result of many years of research:

Pain in the lower back is not treated with anything, except gymnastics, performed regularly.

Next, read the Program of Classes by Evminov's Methodology